Data visualizations are a useful way to condense a large amount of information, and represent it in a format that is easy to read and interpret.

Generating a few visualizations is often easy once you have the data, and can be a good way to explore a data set. You might stop once you find a useful format and put together a script or app to provide up-to-date views, or just gather enough context to decide what to look into further.

In this post I’ll show how to generate line plots, box plots, histograms and scatter plots for a simple data set in Matlab. This data was sourced from Google Flu Trends (updated October 2014 model for United States 2013 data)*.

I’ll import data from a text file for simplicity. Each row of our data source represents a week of 2013.

The first two columns store the date of the first day of the week and the estimated flu frequency for the United States as a whole. The remaining ten columns, which we’ll use for our visualizations, store the estimated flu percentages for standard federal regions 1 to 10. (https://en.wikipedia.org/wiki/List_of_regions_of_the_United_States#Standard_federal_regions)

The first plot we’ll probably look at for a two-dimensional data set is a simple XY plot.

The “plot(X)” command plots each column of X using its row values for the x-axis. 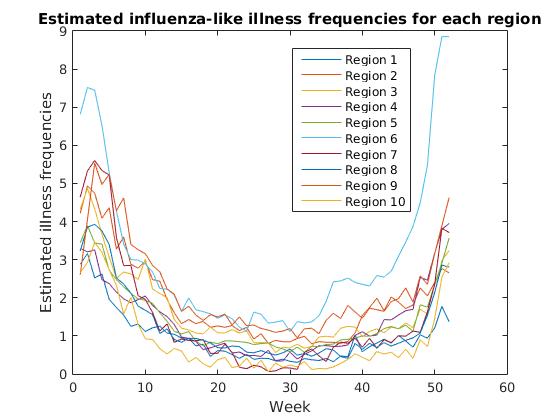 From here we may want to study the median flu frequencies across regions, and look at the deviation for each week.

Box plots are a great way to do this, since they combine all the information about y value distributions for each x value into one clean graph. 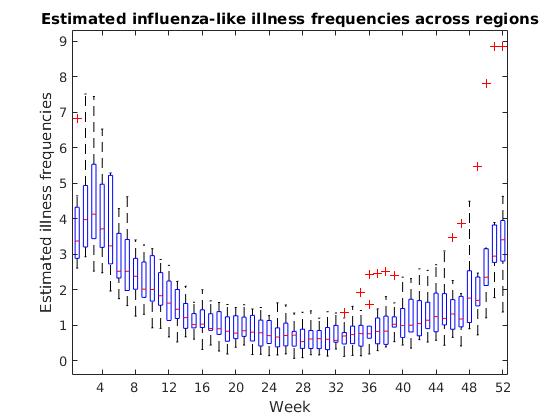 The box plot shows us a few significant values for each week. The red line inside each box displays the median, or the “middle” flu frequency across regions for that week. Half of all regions are above this value and half are below.

It can sometimes be as useful to see where we have outliers in our data as it is to see the most common values, and the box plot marks these outliers with red “+” symbols.

If we want to see how frequent various y-values are in our data set, we may want to consider a histogram.

Histograms are a great way to quickly view the overall distribution of data, grouped into “buckets” or ranges of x-values. 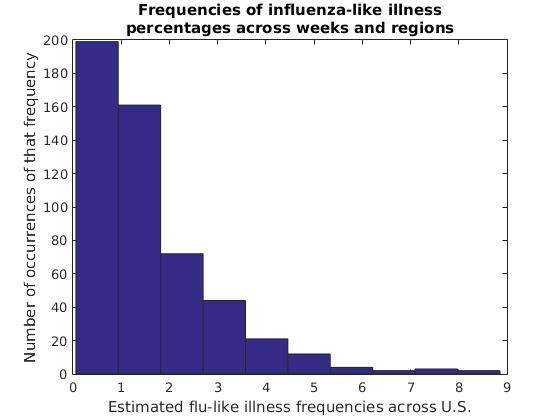 In this data set, flu frequency estimates of 0%-1% are clearly most common, with each range of higher flu frequencies becoming increasingly rare. This isn’t as interesting of a curve as we might find for other data sets, but sometimes a histogram can give us interesting insights into the distribution of our data over ranges such as age groups, income levels, light intensities and other groups of values both continuous and discrete.

We can also view the y-value distributions for each column separately. Here, this is the estimated flu frequency distribution for each region. 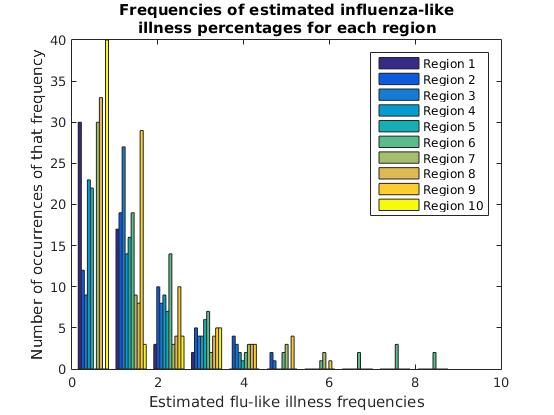 The final type of plot we’ll look at in this post is the scatter plot, applied to comparing two columns or features of our data set.

A scatter plot for a 1-dimensional data set of x and y values is simply a discrete XY plot, where every point represents an (x,y) value.

When we have a 2-dimensional data set, however, we can treat one column as our x-axis and a second column as our y-axis to plot the correlation between two features. 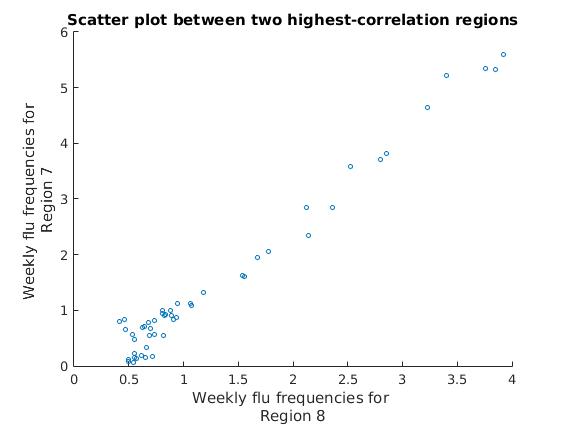 We can see that all of our data points are clustered into a single linear pattern, showing a very high correlation between these two regions’ estimated flu frequencies.

Let’s look at the scatter plot for the two regions with the lowest correlation. 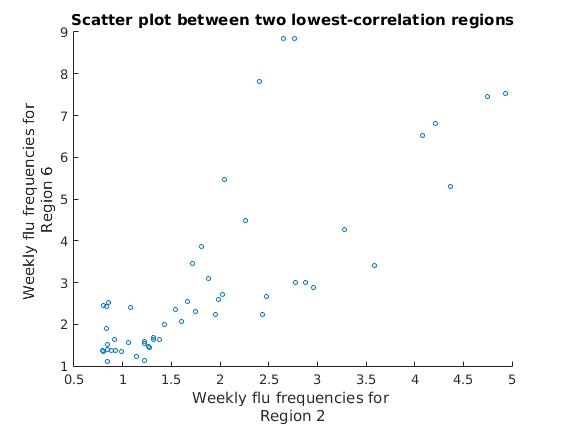 We can see that the approximately linear clusters of data points diverge for these two regions, showing a much lower correlation than with the previous two regions.

A common use of scatter plots is to generate a matrix of scatter plots between columns or features of interest, to demonstrate where there may or may not be clear linear or non-linear correlations.

There are a number of other types of data visualizations, such as heat maps, area charts, pie charts, hierarchical trees and others. Each uses slightly different methods to highlight different aspects of the data set.