An issue that a lot of people run into when automating Docker builds is in figuring out how to wait for services to be set up before running subsequent commands.

For example, you might need your database container to finish initializing before you can run your database migrations and test scripts.

A common solution is to add wait times between steps, adjusting times as necessary. Another solution is to continuously ping the containers to check for open ports or specific files that are created during set up.

Neither strategy is ideal. Fixed wait times are at best unnecessarily long and at worst lead to fragile builds, and open ports and created files don’t reliably indicate that a Docker container is fully initialized.

A third strategy that has been suggested for database containers is to query the database every few seconds until it has been set up with the required user credentials.

This seemed reasonable, but I found that builds kept on running into tcp errors due to the application container accessing the database container at the same time as the script’s queries. I had to keep increasing the initial wait time, which brings us back to an arbitrary fixed wait time.

Instead, I looked at how we know when a Docker container is ready when we’re running docker-compose locally. What do we look for to indicate that containers are set up?

This is what I look for before running additional commands. “Listening on tcp://0.0.0.0:3000”, and “PostgreSQL init process complete; ready for start up.” Even if we start Docker in the background, say with docker-compose up --build -d, can’t we look at the same logs?

Excellent, this will work. We can now write up a bash script to wait until both our containers are set up, using key phrases we know will be printed to logs once the containers are fully initialized and ready to accept commands.

This is the approach I’m using in my Travis CI builds, and it’s worked very well so far, with none of the false failures I was seeing before and a minimal amount of wait time before tests are run.

Example of a test script that uses waitForContainerSetup.sh: 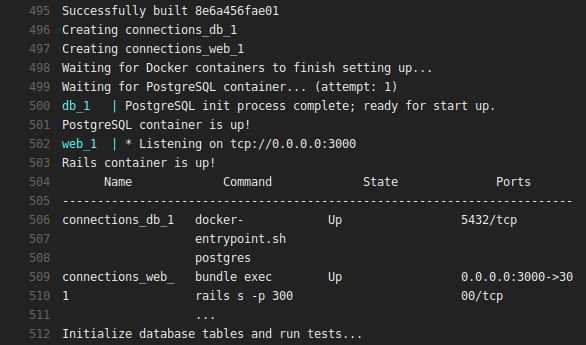 This approach seems to be fairly robust. It’s mitigated my builds’ intermittent database set up errors, allowing me to focus on development and tests.